An incorrect datum, can put you hundreds of meters from your actual position

The datum you have setup in your GPS receiver must match the datum used to create the map you are using. The three common datums in use in the Continental United States are:

Most USGS topographic maps are based on an earlier datum called the North American Datum of 1927 or NAD 27. (Some GPS units subdivide this datum into several datums spread over the continent. In the Continental United States use NAD27 CONUS.)

The Global Positioning System uses an earth centered datum called the World Geodetic System 1984 or WGS 84. WGS 84 was adopted as a world standard from a datum called the North American Datum of 1983 or NAD 83. There is typically only a meter or two difference between WGS 84 and NAD 83 in the Continental United States. The difference between WGS 84 and NAD 27 can be as much as 200 meters.

What is a datum?

Map making begins with surveying. When you survey large areas, you need to take the curvature of the earth into account in your calculations. The earth is a lumpy bumpy three dimensional thing, that can be approximated with a nice clean mathematical ellipsoid. Various regions of the world selected an ellipsoid that best approximated their portion of the earth.

Prior to advent of satellites, most surveying was done on the ground or by using photos taken from an airplane. Early maps and surveys were carried out by teams of surveyors on the ground using transits and distance measuring "chains". Surveyors start with a handful of locations in "known" positions and use them to locate other features. These methods did not span continents well. Frequently they also did not cross political borders. The "known points", their positions and the ellipsoid used are the information that the map datum is based. NAD 23 CONUS datum is one of these terrestrial based datums established from a triangulation station in Meades Ranch, Kansas.

As space based surveying came into use, a standardized datum based on the center of the earth and an ellipsoid the was a good fit to the entire surface of the earth was developed. WGS 84 is a datum in this category.

There is a good article in Wikipedia about the various North American datums and their history.

Finding the datum used by your map

Every map that shows a geographic coordinate system such as UTM or Latitude and Longitude with any precision will also list the datum used on the map.

You should always set your GPS unit's datum to match the datum of the map you are using.

On a USGS topographic map the datum information is in the fine print at the bottom left of the map. Older USGS maps datum will almost always be NAD 27. Newer maps may be NAD 83. During the time period after 1983, but before shifting to NAD 83, there likely will be information on how many meters to shift a position to convert it from NAD 27 to NAD 83. Think of this as the error that will be introduced if you leave your GPS unit set to WGS 84. A dashed cross in the SW and NE corners of the map gives a visual indication of the difference between the two datums.

Setting the datum used by your GPS

Most GPS receivers designed for use with land navigation allow you to change the Map Datum in the Set Up menu. Here is a typical Set Up menu. 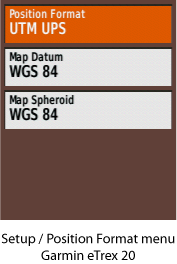 If you have somehow set your GPS to use the Borneo Datum of 1818, it's hard to say how far off you position may be. Let's just sat that this "datum thing" is something you need to pay attention to.

Using maps and charts with different datums on the same mission

If you are coordinating with ships or aircraft, they will likely have their datum set to WGS 84, as most nautical and aviation charts now use WGS 84. Should you worry about the difference in datums? Typically a pilot will not have any difficulty locating you on the ground if you can get them within several hundred meters of your location. This may not be the case for a ship in rough seas. If you are engaged in a mission that requires more precision, then your datums should match or you should convert coordinates to the other datum.

MGRS and USNG 100,000-meter Square Identifications are Different when Used with the NAD 27 Datum

Both the MGRS and USNG systems default to the WGS84 datum. They differ when used with the NAD 27 Datum. This is particularly important to users within the Continental Unites States, where many topographic maps produced by the United States Geologic Survey are referenced to the NAD 27 Datum. The MGRS System shifts the second letter of the 100,000-meter square identification by ten letters (excluding I and O). The USNG system does not make this letter shift, but does require that the datum be specified.

Ihe example coordinate we have been using would look like this when referenced to the NAD 27 Datum:

The letter shift also occurs in MGRS when working with other datum that use the Bessel 1841 and Clarke 1880 ellipsoids, which includes much of Africa, Japan, Korea, and Indonesia. When you are working with old maps and MGRS coordinates, be aware that occasional unusual letter adjustments have been used in the past.