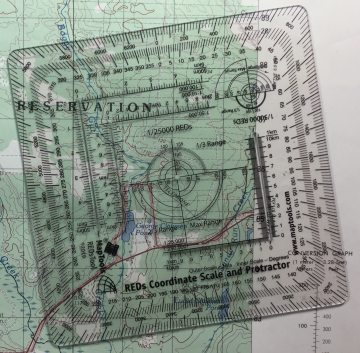 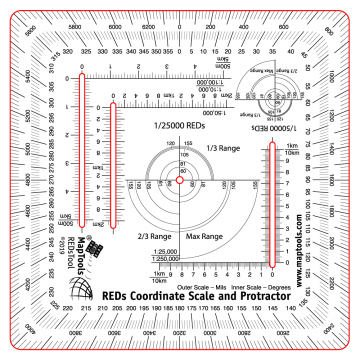 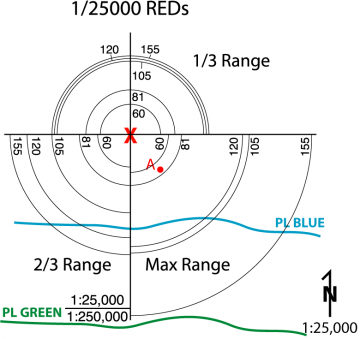 Previous Next
Note: Product edges and interior cutouts are shown with a thin red line. Neither the red lines, colored background, nor map image are printed on the actual tool. (more info)

Risk Estimate Distances (REDs) take into account the bursting radius of particular munitions and the characteristics of the delivery system and associates this combination with a percentage for the probability of incapacitation of soldiers at a given range. The RED-combat (or MSD-training) is defined as the minimum distance friendly troops can approach the effects of friendly fires without suffering appreciable casualties of 0.1% or higher probability of incapacitation.

This tool has concentric range rings for danger areas of mortar and artillery systems. Placing the crosshairs on a target allows maneuver units to see how close they can get to where rounds are impacting and still be safe. This allows fire supporters and ground commanders to plan fires (the term used for indirect systems like mortars, artillery, missiles and ordinance from aircraft) on the objective and ensure consistent fires on the enemy as friendly forces move on the battlefield. This is called echeloning of fires and a more detailed explanation can be found in FM 3-90.2.

The other aspects of the tool are an improved version of the Graphic Training Aid 5-2-12 Coordinate Scale and Protractor used by United States and NATO military forces around the world. By using a slot on one side of the tool for access to the map, the tool can be more compact than the traditional GTA tool. The 1:100,000 scale now spans 5km grid lines, making it much more usable. The overall dimensions of the tool have been reduced so that it is the size of a music CD, easily fitting into a pocket or any slot where you could store a CD.

In order to use the Risk Estimate Distance tool, you must first determine whether you are using a 1/50,000 or 1/25,000 map and then use the corresponding tool on the protractor. Next, place the crosshairs at the center of that tool on wherever you want to target on the map. The tool provides different RED values based on how far away the indirect fire weapon system is from the target. If the distance from the target the 105mm cannon you want to use is 1/3 of its total range capability, then use the 1/3 range half of the circle. If a 60mm mortar you want to use is firing from its maximum range, then use the max range quarter of the circle. Once you have placed the crosshairs on the target and identified which portion of the circle you want to use for your intended weapon system, the resulting circle will tell you the closest distance from the target you can approach while you are firing on it before incurring a 0.1% probability of incapacitation. You can use this tool to plan echeloning fires, identify trigger points, plan attack positions, and more.

In the example shown in the product images above, a 1/25000 REDs tool has been placed on a 1:25,000 scale map at the red X indicating the hostile target. When the target is an area, make sure to position the center of the tool on the edge closest to the troop position you are evaluating. It may be necessary to rotate the tool to place the desired range marks in the area between the target and the point being evaluated. In the example, positions south of the green planning line, could be supported using a 155mm cannon firing at max range. Once troops are between the green and blue planning lines, only 60 and 81mm mortars can be used at max firing range. A 105mm cannon could be used at 2/3 firing range. Once troops are past the blue planning line, supporting fire must be based on actual troop locations. Troops at the point labeled A, could be supported by 60mm mortars at max range.

Scales: † This scale can be used by multiplying or dividing one of the scales printed on the tool by 10. 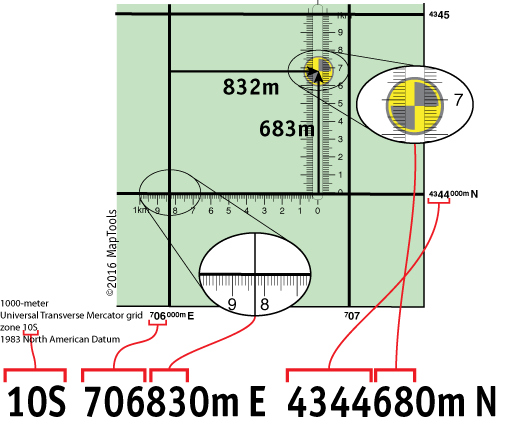 Here is a tutorial on using this type of tool.